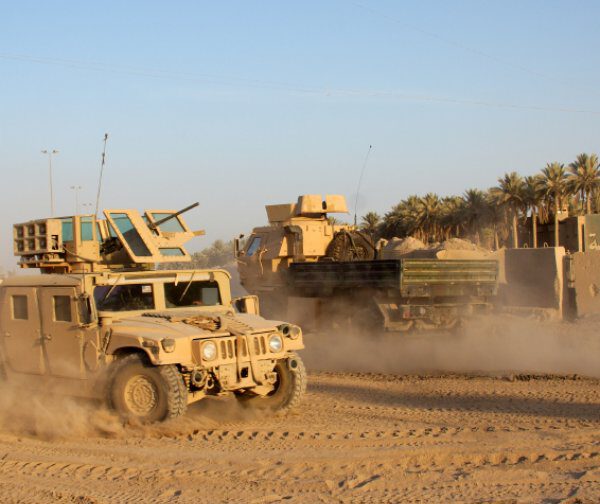 This article describes a method for planning military operations quickly and effectively at battlegroup level and below. This planning method enables orders to be delivered within 60 minutes of the receipt of orders from the higher formation. It is intended for all combat operations, regardless of enemy, own ORBAT or terrain. It will appeal to anyone who needs to produce simple and effective plans quickly.

The Three Step Estimate is not new. It is essentially the product of historical research. It is an updated and re-worked version of the planning and orders process which would have seemed completely normal in British and Commonwealth infantry battalions in the 1940s. Commanders from the 1970s and even the 1980s would be more familiar with this method than they would be with current practice. This is because it is focused on outcome, not process.

All the elements of the Three Step Estimate have been successfully employed on operations. Why they fell from grace is unclear. There is no evidence that they did not work, and significant evidence that they did. It seems that fighting third-rate enemies, and long periods of peace (during which battalion-level combat operations were not routine) led to the over-thinking of processes. This commonly occurs in peacetime training. Intuitive decision making gradually died under the weight of Staff College Directing Staff (DS) reinventing the wheel.

In Britain, children are taught to cross roads safely using the Green Cross Code. Imagine allowing the Health and Safety Executive to constantly revise the Green Cross Code for thirty years without ever crossing a road; or occasionally crossing a road which has no traffic. The resulting code would be forty pages long, cover every eventuality, and be totally impractical. Something similar seems to have happened to the British orders process.

The motivation to develop the Three Step Estimate comes from historic evidence, which stresses rapid planning in order to deliver quick and effective orders. Contemporary military operations may lack motor rifle or panzer regiments, but that does not negate the need to plan quickly and effectively.

The Three Step Estimate uses the 5-Paragraph orders format as an aid to planning. It enables a single officer, working alone, to plan an operation and then give orders quickly and effectively. Those orders should typically be no more than one page long, supported by a few annexes, such as a map overlay and the fire plan. The Three Step Estimate dispenses with all but absolutely essential process.

Possible courses of action are tested against a simple question about the enemy, and possibly against a few quick and simple mnemonics. The Three Step Estimate explicitly does not seek to predict the enemy’s course of action, because you cannot predict what the enemy will do. (If you are confused about that last sentence, please read it again.)

It also makes no attempt to synchronise complex activities. Coordination is delegated to subordinates as far as possible. It avoids explaining the obvious to subordinates. It aims to allow the maximum possible cooperation at lower levels of command.

a. Concept of Operations

Step 1: Extraction. This identifies the relevant detail from the superior commander’s orders. The situation is written down, as it is known, or judged by Intelligence. It is not an Intelligence summary. It is a brief description of the emerging situation, which implicitly explains why new orders are needed. Locations of boundaries, objectives and enemy and friendly forces are marked on maps. The mission given by the superior commander is written into Paragraph 2. Stated timings are written down in Paragraph 3c. Essential details for Paragraphs 4 and 5 are copied down.

Step 2: Planning. This has three stages, which will tend to overlap.

a. Mission analysis. The commander writes down what his superior’s plan is, and his own part in it. He lists stated and implied tasks. He then lists freedom and constraints. Finally, he asks himself if anything has changed since his superior gave his orders. If something has, he considers the consequences.

b. Reconnaissance. The commander creates three options. He does so at an OP if possible. If not, he does so from an aircraft, or using a map or a digital battle management system. His three options may be alternatives of place (for example, left flanking, right flanking or frontal), time (for example, night or dawn attack, or sequence), activity (ie, attack, infiltrate or bypass); or some combination.

c. Decision. He compares those three options. He then asks himself: ‘based on the situation as I understand it, what could the enemy do to prevent me from achieving my mission?’ He does this for each option. He might compare his options against the core functions, functions in combat, an aide memoire for a particular task, or similar.

None of the three options will be perfect. Comparing them will indicate which is the most promising, and what modifications need to be made in order to achieve the mission. At the battlegroup level, this comparison should be made in discussion with a subordinate, such as the 2ic or battery commander. An option is selected and modified, verbally, as the basis of the plan.

Step 3: Production of orders. The orders are the plan. The commander writes Paragraph 3a. and b. in person. Each subordinate grouping is given a mission statement which is one (repeat: one) task, together with its purpose. Each paragraph is then completed, or re-written, to reflect on the chosen option as a set of orders. If the result is materially longer than one page it is pruned. Often there will be nothing, or little, in Paragraphs 4 and 5. Orders are then given.

The content of the orders will vary, depending on the type of operation. River crossings will require headings not used for a ‘relief in place’ operation, etc. This suggests the need for an Aide Memoire to provide the relevant headings and to guide planning. That means a short and simple one-page card to cover each type of operation.

This looks simple. It is. It, or something very much like it, worked for decades. It would be simple to trial it against other methods. But remember: the Three Step Estimate can produce battlegroup orders within 60 minutes. To compare ‘like with like’ requires a trial which requires commanders (with their staffs where necessary) to do just that. If the Three Step Estimate produces broadly the same plans as more lengthy and complex processes, then this method is all you need.

The Three Step Estimate was tested in a planning exercise set by a retired officer who had no knowledge of the process. The people who took part in the exercise had very varied military backgrounds in terms of rank and experience. They worked alone and independently. They all produced broadly the same plan. Two did so in under 60 minutes. The least experienced member of the team took roughly 70 minutes .

A critical aspect of the process is the question ‘based on the situation, as I understand it, what could the enemy do to prevent me from achieving my mission?’ This question does not seek to predict enemy action. It is very different from ‘what is the enemy trying to do and why?’ It is designed to examine the consequences of actions which the enemy is thought to be capable of, and likely to carry out, based on experience. It does not ask ‘what is the enemy doing’, because until and unless the enemy is observed doing something, you cannot know what they are trying to do. You should have no interest in why the enemy would do anything. You are only interested in what he might do to prevent you from achieving your mission. You bend the enemy to your will. You do not bend to his.

Answering the question ‘what could the enemy do to prevent me from achieving my mission?’ should also prompt you to consider the possibility that Intelligence about enemy strengths or locations, or both is wrong. Because of that possibility, simple but flexible plans are best. Simple, flexible plans need less planning than plans which are not.

If you need a quick and simple method to plan and write battlegroup orders in less than an hour, the Three Step Estimate is all you need. The weight of history and some simple testing tells us that it can do just that. However, it needs repeated practice before being used. History tells us that, with practice, battalions could write and give orders in an hour, with complete confidence in the results.

Exercises to test and practise the Three Step Estimate are extremely simple to plan and conduct. DS should not dissect each and every plan that officers submit. Instead, they should explore how students saw the problem and what they chose to do as a result.

Trials have revealed a fairly natural and intuitive process of planning which asks: ‘what have I been told to do?’ (the mission); ‘how will I do that?’(the plan); then ‘what can the enemy do to stop me?’ (modify the plan). That process generates the orders directly.

Practice will transform the Three Step Estimate into second nature. It contains almost no explicit process, and is judged entirely by output. Providing that the method is carried out broadly as described, the precise details of how anyone does it are irrelevant. They will, and should, vary from person to person. Students learn by doing. They learn to do it well through practice, and by comparing their plans with their colleagues. They quickly find out what works and what does not; what is good and what is not; and whose ideas to listen to. If one officer seems to be good at it, and others want to learn from him, they should do so over a couple of beers: not through Death by PowerPoint.