How Armor Units Adapted to the Urban COIN Mission in Baghdad 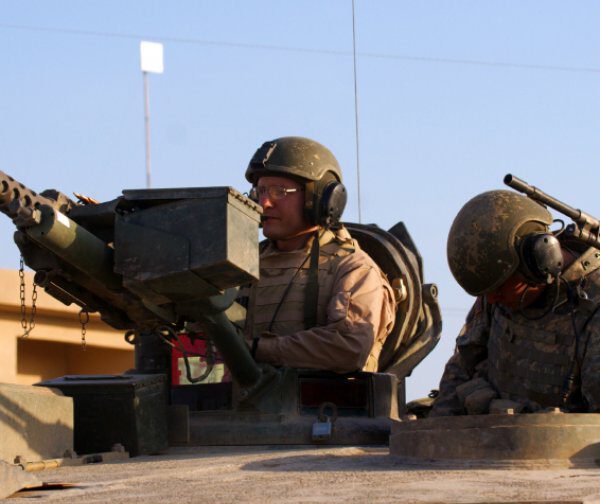 To cite this article: Fark, Kason, “How Armor Units Adapted to the Urban COIN Mission in Baghdad”, Military Operations, Volume 1, Issue No. 4, Spring 2013, pages 8-9.
Kason Fark is a former US Army Fire Support Specialist and NCO Academy Instructor. He holds a BA in International Security and Conflict Resolution and is currently working on an MSc in Conflict Analysis and Resolution.

During the 2007 Baghdad Security plan, the U.S. military faced a major challenge: to secure and pacify a major world city in which all sides were fighting for control. In its arsenal was an overstretched conventional force suffering from extensive deployments, suicides, equipment shortages and malfunctions, and a declining pool of suitable replacement personnel. This was a mission that put American innovation and resilience to the maximum test.

To accomplish the strategy chosen by General David Petraeus, the ground commanders in Baghdad utilized a combination of superior conventional firepower and ground personnel saturation by establishing a large number of combat outposts (COPs) in the densely populated neighbourhoods far from the Green Zone and airport bases traditionally used from 2003 on. Like the subsequent Afghanistan strategy, these combat outposts had to suit one company of U.S. forces alongside half a battalion of Iraqi Army forces, meaning COP designs could not be too centric to the needs of American forces.

To satisfy the diverse requirements for these outposts, ground commanders needed flexible subordinates and the maximum number of boots on-the-ground. Infantry units with four platoons of 30 soldiers served this role easily, but non-infantry units such as field artillery and air defence artillery battalions had a much more difficult time finding the manpower needed to service multiple outposts and simultaneously meet patrolling requirements. Armor units were among the most challenged units for specific reasons.

First, armor units, even combined arms units, are comprised mostly of tank companies. Each company has three manoeuvre and one Headquarters platoon for a total of 14 tanks. Since each tank carries only four soldiers, the platoons are limited to 16 soldiers each and eight HQ soldiers (56 armor crewmen in all). HQ platoon also features a Bradley Fire Support Vehicle (BFSV), and an M1119 Humvee with four support personnel (supply communication, and chemical, plus the First Sergeant). In total, an entire armor company has 64 personnel, or roughly the equivalent of only two infantry platoons.

Second, armor crewmembers are trained singularly on the application of devastating firepower on an opposing conventional force. While most basic infantry soldiers also lack the requisite counterinsurgency skills needed to ensure proper treatment of civilians and municipal capacities in urban COIN, infantry NCOs have for a long time at least been trained in proper detainee handling, interaction with locals, and general behaviour in the capacity of occupation. Armor crewmembers on the other hand may receive this training annually, but until Training and Doctrine Command revised the Common Task Training manuals, this training was not emphasized or practiced in field exercises. The secondary and tertiary effects of using 120mm Sabot rounds to dislodge enemy fighters in buildings were also a difficult concept for many armor soldiers to grasp.

Third, armor crewmembers become subject-matter experts in their appropriate equipment (i.e. M1A2 Abrams or BFSV), but in the application of COIN principles they must leave their heavy equipment in the motor pool in favour of light wheeled vehicles. Under normal circumstances this transition is easy, but in the course of evolution of tactics, techniques and procedures in Iraq, armor crewmembers found themselves learning Humvees from the ground up. Dismounting an Abrams is only performed during fire drills and fuelling operations, but armor crewmembers found themselves dismounting trucks regularly, forcing them to re-learn basic infantry operations last taught in basic training.

The challenges faced by armor units were not insurmountable, however. Combined arms units have a long tradition with ‘slicing’ or ‘detaching’ one platoon of infantry to the armor company in exchange for a tank platoon to the infantry company. An additional answer to combat the shortage of personnel included battalion commanders cycling their special platoons (mortar, scouts, etc.) into roles as manoeuvre platoons to supplement understaffed outposts. Alternatively, these platoons could perform as the Quick Reaction Force for the entire battalion area, either forward staged in a company outpost or on roving patrol in-sector as the battle captain saw fit.

The lack of COIN knowledge became resolved when company fire support personnel, who in urban settings were considered regular infantrymen, were trained on counter-insurgency techniques. This enabled the company commander to have a versatile targeting (kinetic and non-kinetic) group located within his or her own HQ, using soldiers already highly trained in calculations, communication, and efficient use of combat multipliers. For the armor platoons, a well informed Forward Observer became the intelligence officer of the platoon, tracking people and vehicles for quick field identification and apprehension.

Tactical questioning of detainees by the fires cell, as well as loaned Human Intelligence collectors enabled the company commander to track local grievances to be attended to in the meetings with the local councils. Eventually, each soldier, regardless of prior training, became attuned to the problems he created by wanton negligence and careless aim of weapon systems, understanding that each innocent victim of US firepower brought a family seeking vengeance.

For armor platoons patrolling in Humvees, platoon leaders modified tactics to create a mirage of additional troops, including dressing interpreters in the same uniform as the platoon and arming them, requiring combat medics to carry rifles or carbines to appear as regular soldiers, and ensuring they grabbed any extra personnel from HQ to fill empty seats in their vehicles. Instead of 16 soldiers on patrol, they were able to form an illusion of over 20. Additionally, having the Bradley Fire Support Vehicle in the lead of the column could add significant firepower, deterrence, and radio range with only an additional three people to the patrol.

Recommendations for future use of armor units in the application of COIN principles have been made at many levels. On the squad or tank level, soldiers should familiarize themselves with dismount procedures from all types of vehicles, ensure their kit can be quickly accessed and donned, and be intimately familiar with current urban fighting techniques. Young soldiers just out of basic training should be taught the skeleton of COIN principles with an emphasis on secondary and tertiary consequences of violent action against civilians.

Armor platoon leaders should schedule quarterly training with combat multipliers such as Military Working Dogs, Forward Observers, and Unmanned Aerial Vehicles. Weapon systems operators should be instructed as to which types of targets they are authorized for, alongside standard Rules of Engagement training. Company commanders should enforce the multi-use capacity of their fires / targeting cells and ensure all fire support personnel have access to training alongside battalion or brigade Human Intelligence collectors.

Commanders facing the possibility of counterinsurgency operations in urban terrain will be tempted to use their firepower to create a sense of fear in the enemy. However, creating fear in the eyes of the people, thereby making enemies out of civilians, may make the unit worse off than necessary. Lastly, when considering the maintenance and logistics, as well as the limitations of armor in confined areas, commanders will find success in moulding their unit to the mission instead of moulding their mission to the unit. These are the lessons of the forgotten wars.