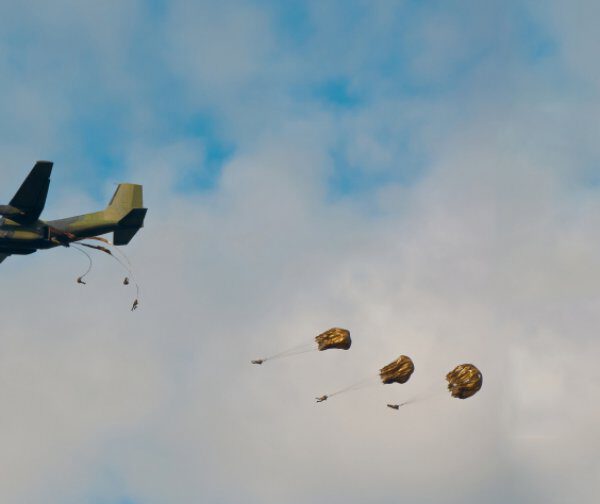 Parachuting into battle was an enduring yet emotive aspect of 20th century warfare. Developed variously between the Poles, Russians, Germans, British and Americans, parachute insertion primarily came to the fore between 1938 and 1944. The German  success  of  Crete in May 1941 (portrayed as a failure in most western military academies) may well have been at great expense in terms of casualties, but it led directly to an ignominious Allied withdrawal from the island. Few historians would cite the allied airborne insertion into Normandy in June 1944 as a ‘failure’. Even Arnhem demonstrated that a British Airborne Corps could be deployed in depth. The intelligence failures of September 1944 can hardly count as an argument that Operation Market Garden was flawed as a concept. In similar vein, the crossing of the Rhine in March 1945 (including a substantial airborne element) was a success.

Yet it was the British who were first to ‘pull the plug’ on the airborne capability, only realising, far too late, of its necessity in November 1956 at Suez. The fact of no subsequent parachute operations involving the UK’s conventional military forces — albeit, that there were considerations as an option within recent operations — has led to a general belief that parachute insertions, like the horsed cavalry, have  ‘had their day’.

It must also be said that the green-eyed envy of the British Army’s infantry has had much to do with a perception that parachute insertion into combat is no longer viable, a view only too often repeated by senior officers of the Royal Air Force, equally determined to marginalise air transport (already near capacity in Afghanistan) in favour of fast jets. With the focus on British land warfare capabilities on 7 June 2012 at the Royal United Services Institute’s (RUSI) annual Land Warfare Conference and the announcement of a 20% reduction in the size of the British Army, this debate could not be more topical and apposite.

In this article, I am proposing quite the opposite: that parachute insertion both in counterinsurgency and conventional warfare is as relevant today as it so clearly was in WW2. The Americans, the French (with an airborne capability of 9,000 personnel conducting a minimum of six descents annually) and Russians need no convincing of my argument, so let me focus on the peculiar British aspects of the debate.

First and foremost, a parachute capability is (compared, for example, to the cost of an equivalent armoured capability) relatively inexpensive. A tactical air transport fleet is regarded as an essential requirement regardless of any parachute capability. Nearly all military transport aircraft are, as a matter of routine, fitted for a parachute role. A heavy drop capability, likewise, involves but a few steel platforms. Nor is there a major cost involved in the training of both paratroopers and jump instructors. From time to time the Air Transport fleet might well be over-taxed (as  in Afghanistan currently) and yes, those in training might well face delays in completing their ‘jumps’, but that does not equate to a claim that the parachute insertion capability is thus economically beyond our means. The Territorial Army also has its part to play in providing ‘fill in’ reserves at minimal cost.

It is next alleged that the ground-air threat makes any such operation fraught, with the possible loss of life if even a single C-130 was to be shot down. There was much said in support of this point of view when it was considered that the United Kingdom Joint Air Task Force (UKJATFOR) of the 1970s might be required to reinforce NATO on the Central Front during the Cold War in the face of massive Soviet ground-air capabilities. This, though, is no longer the case, as witnessed by complete air domination over Afghanistan, Libya and Syria, to name but a few most recent and continuing conflicts. Certainly, complete neutralisation of the ground-air threat requires substantial resources, but by working with allies this can be achieved, as in Iraq in 2003.

It is then wrongly presumed that helicopters might achieve greater precision. But support helicopters (SH) are painfully slow in terms of tactical, let alone operational, reach and are therefore easy targets in themselves. SH also require large amounts of fuel and nowhere near replicate the capability of relatively fast tactical insertion of a massed combined arms combat force by fixed wing. And as was also seen in Vietnam, helicopters are hugely vulnerable to ground–air fire.

As just one illustration of the capability gap, during my time as commanding officer of a parachute battalion, a company group was despatched from RAF Lyneham directly into Egypt by parachute insertion, refuelled over the Mediterranean Sea. A helicopter equivalent would have taken days to achieve the same mission.

It is then suggested that weather conditions or the terrain might cause problems. This is, of course, true, as exemplified in the planning for Jebel Akhdar in 1959 or the Kiel Canal disaster of 1974. But one has only to look at any detailed map of third world countries to immediately note that the climate is usually benign, and that vast areas of countryside are devoted to agriculture, allowing soft landings all round.

Lack of capability is another shibboleth. It is agreed that in the past, nearly all ‘heavy’ equipment such as artillery, engineers, armoured reconnaissance etc, required heavy lift – and hence were typically delivered by glider (incidentally, this begs the question: why have gliders become extinct?). But today’s anti-armour capability, in the form of JAVELIN, can be brought to the battle under the parachute of its operator, and there is no reason why air re-supply onto the gun or mortar line cannot be exact. From my cottage in Wiltshire I watch every day as RAF C-130 crews practise such pinpoint delivery on to the Everleigh Drop Zone on Salisbury Plain.

In all this the most compelling argument is one of politics. Indeed the most concise criticism against a modern British parachute capability was outlined by the Secretary of State for Defence on 7 June 2012 at RUSI. After the searing experiences of Iraq from 2003 to 2009 and Afghanistan from 2006 to 2014 (we hope), how very much more convenient if British forces were incapable of rapid insertion into ‘troubled waters’ on grounds of unaffordability?  On this basis, a collective wringing of hands within Government, the Armed Forces and media at the most recent atrocity requiring a British response would satisfy everyone. Inaction in the face of adversity would then be justified. Yet we know from 20th century political and military history where that has led.

In conclusion, the logic of a rapid, airborne means of delivery of combat capability in the age, according to General Sir Rupert Smith, of ‘wars among the people’ (ie intra-state conflict) is somewhat staggeringly obvious. The requirement for Very High Readiness contingency expeditionary forces able to react with speed, reach and agility to as-yet unknown threats to British interests seems all to obvious.

This is not to say that delivery by parachute is the only, or most efficient, means available.  However, in the context of a non-existent airhead, the capacity to drop a combined arms sub-unit of, say, 330 men, a battle group of around 900 or a brigade of circa 4,000 can only be a ‘plus’ in the national armoury, not the ‘minus’ as currently portrayed by those who seem determined to decide otherwise when it comes to investment in Defence. And let us not forget the huge resources available from the USA, our closest ally. I watched as my battalion, the UK’s Lead Parachute Battle Group of 1996 ,was simply swallowed into the US C-130 fleet; to be flown, with allies, to target.

This, after all, was the British experience of World War 2.  So why not today as well?